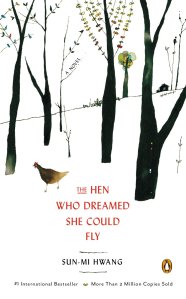 The Hen Who Dreamed She Could Fly, by Sun-mi Hwang (Oneworld), translated by Chi-Young Kim. This is a very tender story, which for some reason struck a similar harmony in my head as my memories of a favourite childhood book, Amos and Boris.  Maybe it is the illustrations that are reminiscent (they are by the artist Nomoco, are really sweet, and the cover is a masterpiece) but I think it is more than that. It is the opening up of a world, of looking about you and realising that horizons are not impassable (I know that a horizon can’t be reached, I’m just trying to wax lyrical for a bit) and there is so much to experience, so much to see. 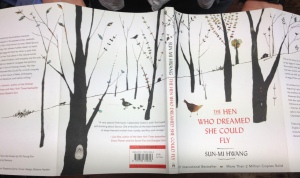 The story centers on the eponymous hen of the novel, who goes by the name of Sprout. She chose the name Sprout by admiring the reproductive capabilities of the world beyond the mesh of her cage – she is a battery hen, fit only to lay eggs until she can lay no more. I won’t say how she gets out (you know she gets out because it says so on the inside cover) because this book is so short (134pp) that even the faintest slip-up on my part will lead to plot ruin, but get out she does and this begins the start of an adventure. No, not an adventure – a learning is probably a better word for it, a learning that happens to a poor old soul who has spent too long dreaming about what freedom can be. Sprout will learn that people who have everything can be spiteful and selfish, that freedom is dangerous without a safety net, and that against all these odds happiness, forgiveness and love are the sweetest of rewards.

This, this is what Chicken Run should have been. No comedic rats, no American sodding circus cockerel, no mechanised escape machine, just a story about a chicken which is also a story about humans, with no reference to the Great Escape required. Just as Jonathan Livingston Seagull is a beautiful story about transcendentalism (not strictly true, but I am trying to talk about a different book here and only have so many words), The Hen Who Dreamed She Could Fly is a heartfelt allegory for how we should always strive for our ambitions. Oh, there is also a really fantastic weasel.

Sprout spent the entire day in the fields. She snacked on caterpillars, scratched at the dirt, and took a refreshing snooze on her stomach. There was so much more to do than she had imagined. Nobody bothered her – the ducks went over the hill and didn’t return all day, and the rooster couple didn’t venture beyond the garden. Sprout was content. But as dusk fell she began to worry. She had to find a safe place away from the weasel. She looked around the fields for a secluded spot to sleep. But there was nowhere she could hide. So she went back to the yard.

I’ve got one last thing to say, and I’m afraid it is a bit of a moan, so if you don’t fancy a moan stop reading now, or let us know in the comments. My moan, and it is probably more than a gripe, is that when a book has been translated into American English, and is then bought by a British publishing house, why, oh why, can’t they take the small amount of time required to naturalise it? Now I am probably being an out-of-date bore here, but we have done it to translations we have bought, it doesn’t take long and the translators often don’t mind, and it stops the reader (I performed a poll of one) from becoming truly absorbed in the tale. I’d be interested to hear your thoughts.

EDIT: As you can see from the comments below, Juliet Mabey (director of Oneworld Publications) got in touch to reassure us all that the next print run will feature naturalised language, and that the reason it had not happened previously was because of it being featured as part of the Waterstones Book Club and needing to be rushed to print, which is a good reason. On a slightly sickening creepy-crawly note, you should all look at what Oneworld do as they consistently produce fantastic works of literature. They also had a hand in building the Alma Classics (née Oneworld Classics) imprint.